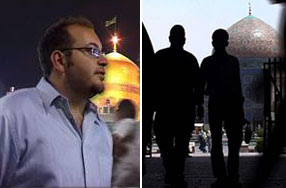 Running Time: 55 minutes
Country: US / Iran
Director: Nezam Manouchehri
In Attendance: Nezam Manouchehri & Jason Rezaian
A World Between is the story of a young Iranian-American raised in the United States, who travels to Iran to discover his father's homeland. His encounters take him across the country, from the teeming capital of Tehran, to the center of Ancient Persia in Esfahan, and finally to the home of his ancestors in Iran's holiest city, Mashhad. In each place we meet his friends and relatives who help form a more representative view of Iranians rarely seen in the West.

Nezam Manouchehri
Director
Nezam Manouchehri is a writer/translator photographer/filmmaker and actor (Deserted Station), born and brought up in Iran. Went to England and US for his higher education. Graduated from San Francisco Art Institute and made a number of short films. He also attended San Francisco State University where he was granted an MFA. He moved back to Iran after the war, where he is currently residing.